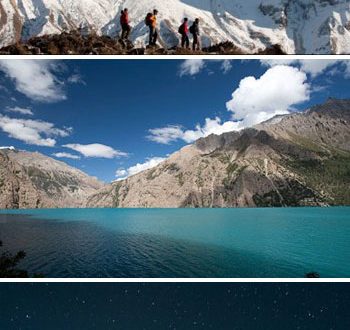 The 1,700 km Nepal section of the trail begins near Kanchenjunga on the eastern border and heads west navigating the domains of eight of the world's 8000m peaks, from the beautiful but lesser-known Makalu to the famous Everest. It is not the easiest nor most direct route across Nepal, rather a route through the Greater Himalaya. The Nepal section ends in Humla on the Tibetan border.

The route offers an incredible diversity in terms of landscapes, flora & fauna, people and culture: from snow leopards to red pandas; from sub-tropical jungle to fragile high-altitude eco-systems; from the famous Sherpas, to Shamanism, to the ancient Bön Buddhist culture found still in Dolpa.

The Nepal section is part of a longer alpine adventure traversing the spine of the Himalaya from Bhutan to Pakistan. These sections are currently being researched, trekked and documented. There still is a a lot of Great Himalaya Trail exploring yet to be done!
What is the trail?

Until recently the trail remained an undefined idea – there was no one, logical trail.

In 2006 the Dutch development agency SNV and the International Centre for Integrated Mountain Development (ICIMOD) in Kathmandu proposed developing an official Great Himalaya Trail from near Kangchenjunga in the east to Api-Saipal in the far west of Nepal. If opening up wild and remote parts of the country could attract trekkers away from the busy areas like Everest, it could benefit more of the 1.8 million people living in the mountains.

Their plans are moving ahead involving all of the affected stakeholders: from renowned mountaineers and trekking guides to the Nepal Tourist Board and the Trekking Agents Association to the village Development Committees in the remote areas the trek passes through.

However it was early 2009 that truly gave birth to a Great Himalaya Trail in Nepal. Robin Boustead supported by his wife Judy Smith and friends who walked the trail in stages beginning in September 2008. It took a lot of research to identify a true high-alpine route that was feasible for trekkers. Robin said:

«If someone gathered enough information on that area, it would be a great trek for everyone»

Robin was that someone and he has documented his route meticulously using GPS. The route, distances, elevations, water sources, villages and camp sites will all be detailed in a guide book to be released early 2010.

Still, the Great Himalaya Trail is new and will evolve over the coming years through the preferences and suggestions of trekkers completing the route or sections of it. This is why it is so exciting to get on the trail now.